Norway has been on our must see destination list for some time.  When it reopened for travel, I was on it, booking flights & trains! I’ve known for some time that Norway was home to what’s arguably 2 of the most scenic train rides in Europe.  The Bergensbanen & The Flåm Railway. We did both!  The idea for ‘Ms Sassy Travels’ was actually born on the Bergensbanen while riding through the snowy mountains!

Flight – Iceland to Oslo was a short (2hrs, 40min), very inexpensive ($166 for 2 – coach!), non-stop flight on Norwegian Air.  AND I paid the baggage fees IN ADVANCE! They were nominal!

Trains – There was no need for us to rent a car in Norway.  After thorough research, I decided that we’d take the high speed train that was @ the airport, Flytoget Airport Express, to Oslo Central Station – we purposely stayed in a hotel that was within walking distance to Oslo Central Station because we would catch the scenic train from there the next day.     We then discovered that Norway is indeed expensive as 2 roundtrip Flytoget train tickets were about $94 with tax for the 2 of us.  It’s cheaper to buy roundtrip tickets as we’d have to get back to the airport for our flight to Finland.  There are EASY to use ticketing kiosks not too far from where the trains depart.  The kiosks are able to be changed to a variety of languages, so we had no difficulty changing the screen over to English.  It’s 36 minutes by car from the airport to Oslo Central Station & 19 min via the speed train. 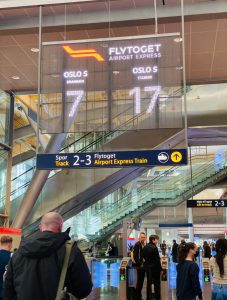 Side Note – If I had to do it again, I would’ve really packed light for this trip because it was very evident that we’d severely overpacked when we were getting off & on the train.  So tiring!

Accommodations – I chose to stay @ the Scandic Byporten – Hotel Oslo Central Station, which is within a 2 minute walk to the train station, & had a very small standard twin room with breakfast.  Men (or ‘brush cut’ ladies like me!) could also get a haircut @ the cute little barbershop in this hotel, too!  This room we booked on the Southwest Airlines app as you can book hotel rooms & cars through them also.

This Scandic was clean, nice & small.  We bought the rate that included what turned-out to be a wonderful buffet breakfast @ at a restaurant adjacent to them called Egon.

Food – We only ate @ Egon Restaurant.  The dinner was wonderful & $, the free breakfast buffet was extensive & just as good.    Side Note – If you’re ever checking-out of a hotel & you need to leave your luggage for a few days, always check with the hotel.  A lot of them will store your luggage safely until you get back.  The Scandic Byporten had no issue keeping 4 bags of ours until we returned from Flåm & Bergen, 4 days later.  The next morning, we got up @ o’dark thirty to take the Bergensbanen to Flåm for a night & then on to Bergen.  I’d bought the scenic train tickets off of the vy.no website tickets.  We had very good seats on both train rides, & was super curious to see if either of these rides came even close to our very 1st scenic train ride in Switzerland, the Bernina Express.

We easily found the train & our assigned, 1st class seats on the Bergensbanen.  The train wasn’t crowded.  (Thankfully all signs in the airport & train stations have an English translation underneath the Norwegian language description).

I didn’t sleep much the night before in anticipation of this scenic train ride.  I was so looking forward to it!  Whereas the scenery from the windows on the Bernina Express quickly turned gorgeous, it took almost 90min of riding on the Bergensbanen before the scenery turned into beautiful sights to behold!

Later in the trip, the train’s food bar opened.  Floyd & I shared meatballs, mashed potatoes w gravy & a little side of green beans – which tasted & looked very much like Ikea food.  It also wasn’t included in the train tix price. 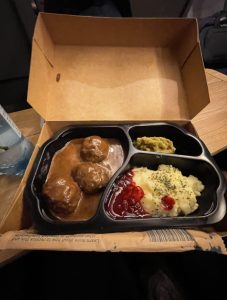 Our stop was the ‘Myrdal Station’, & once we got off, the Flåmsbana train was right there.

Is a beautiful little town discovered when I was looking for scenic train rides to take & came across the The Flåm Railway, aka Flåmsbana.  There was a possibility that this was one of the ‘Most Scenic Train Rides in Europe’, & I was definitely going to make a reservation for us!  We were going to take the train trip almost in the middle of Norway’s winter.  How exciting because trust me, #coldvacaysaredopetoo!  The Flåmsbana reminded me of an ‘old school’ train, it was open seating & not crowded @ all.  It was 45min – 1hr of riding through the most breathtaking mountain views that were heavily laden with snow.  It was also actively snowing & that didn’t stop the train @ all.  There were several cute, snowy little villages viewed from the large windows, also.  Where the Bergensbanen made no stops for passengers to get off & take pictures, the Flåmsbana did make 1 stop @ Kjosfossen waterfall (frozen @ the time).

*** We also missed our train out of Flåm back to the Myrdal Station to catch the next train to Bergen because I had selected the wrong departing station!!  I was almost in tears!  So be sure when you’re making a reservation that you’re choosing the correct station!  That 1 mistake cost us more money because the train from Flåm only goes out so many times/ day.  Since we missed the departure, that eventually made us late getting to Bergen.  We were only spending a day & a night there, & that was actually enough time for us to see what we wanted to see. ***

Flåm is hands down the most adorable little village EVER that was nestled deep between tall mountains & sitting on the shore of Aurlandsfjord.  It was early March & there were NO crowds.

I chose the Flåmsbrygga Hotel & it ended-up being a very short, direct walk (4-5min) from the train stop.  I was super nervous as I approached the hotel as it’s not at all beautiful on the outside, but our ‘twin room with balcony’ was super cute!  It was very comfortable & we weren’t disappointed.  Our view of the fjord from the Flåmsbrygga balcony, was really nice & our rate included a small, but good buffet breakfast the next morning.
We dined @ the Flåmstova Restaurant & we were NOT disappointed.  The fish & chips were 100% on point for me, Floyd had lasagna & a burger that was also very good.  We also shared a piece of their magnificent carrot cake!

Right next door to the train station & hotel are a few souvenir shops that I had a really good time in!  #moremoney$

Side Note – Norway also has Tax free shopping if you permanently reside abroad & you spend over a certain amount.  You may need to ask for a Tax Free Form wherever you’re shopping (merchants won’t always offer it to you), & the form is turned in @ the Oslo Airport when leaving the country.  (Of course if you’re flying from another airport, google where to find the office to turn in your form.)  Make sure you give yourself plenty of time to locate where you should turn the form in, too! Stegastein View Point – This was Floyd’s awesome #sideNote & is not to be missed!!  We took a private tour just for the 2 of us & it took about 20min to get to the view point.  It was cold, lightly snowing & a gorgeous view of the fjords below.  Our driver took this lovely pic of us! 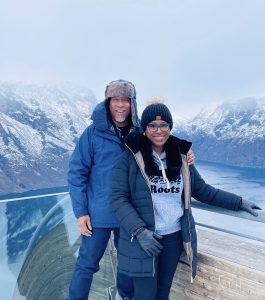 Train – The train ride from Flåm to connect back to the Bergensbanen in Myrdal was again very beautiful, & this is where the train became crowded.  Voss Station is a inevitable stop while on the way to Bergen, & that’s where TONS of people with ski’s in hand boarded.    Our destination from there was about 2hrs away – the Bergen Station.  We arrived after dark, we were tired & didn’t exactly know where our hotel was, though we knew it wasn’t far.  We actually took a cab & it ends up that the hotel was just a couple of blocks away, lol.  We found out the next day that it was certainly within walking distance – like 3 blocks away, lol! Accommodations –  We spent a wonderful night @ the Bergen Børs Hotel.  It was our largest room to date, but still a bit small (European Hotel sized rooms), & it was very nice!  Their included breakfast was @ their Michelin (1 star) restaurant, Bare.  Make sure you wake-up on time for this, because it’s definitely worth it!

Food – We dined @ 2 other delicious eateries!

Walking Tour  – The next day, we were up for the delicious breakfast & to begin looking around.  The must see was the Bryggen – UNESCO World Heritage Centre – these are the cute, colorful houses in Bergen & within a very short walking distance from our hotel.  This was the main reason why we came to Bergen, HOWEVER, we were disappointed as some were being remodeled & had tarps over the top of them! 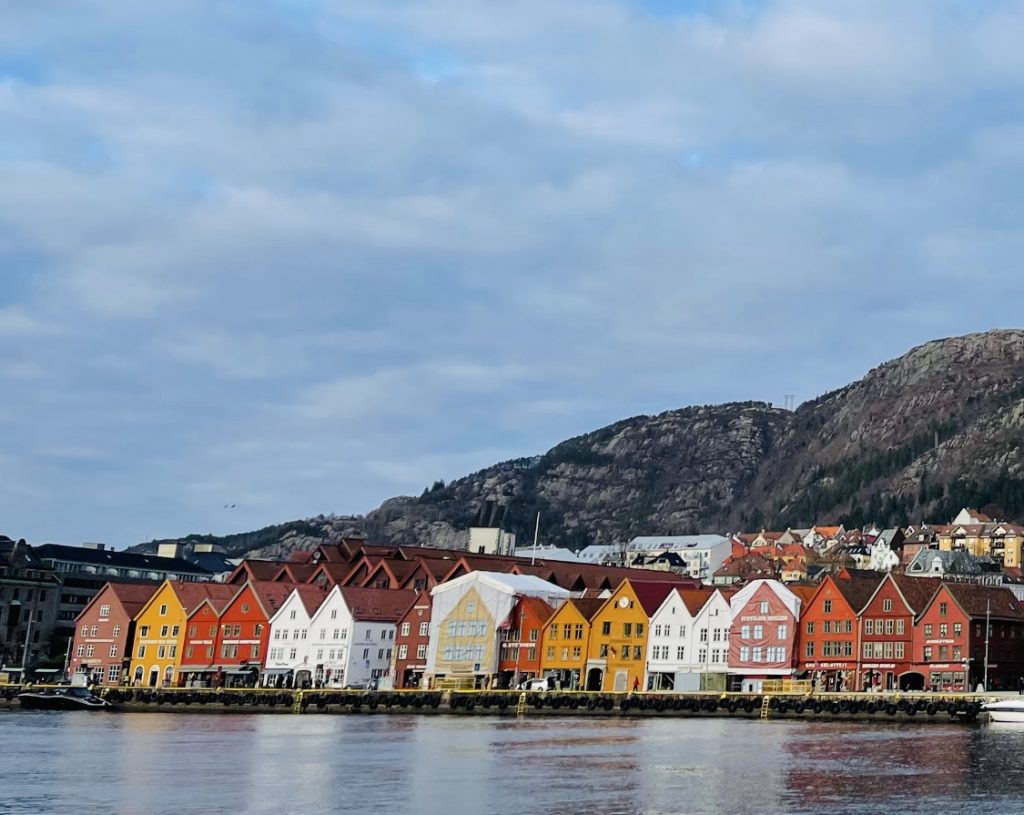 There are great souvenir shops along the same road & you know I love ‘souvi’ shopping!

Then a Hike to the Mount Floyen View Point – was a discovery & we trekked-up pretty far (not all the way).  It’s a very taxing, but nice walk-up the mountain that winds through a neighborhood of pretty houses & European style apartments, & there are spectacular views of Bergen.  There’s also a Fløibanen funicular that you can take up, but it was closed for repair while we were there. 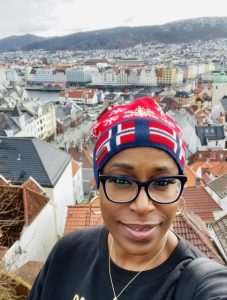 Flight from Bergen to Oslo –  Since we’d missed our train from Flåm to Bergen, we had to extend our time so that we could properly see Bergen.  The extended time meant that we couldn’t use our train tickets as I’d purchased tickets for that part of the trip that weren’t changeable.  Ugh!  Turns out that we’d have to pay abt $300 to get later train tickets for a trip that would take about 6hrs & get us back to Oslo very late (we had a 7am flight to Finland!).  So after a quick search, I found one way plane tickets for the same price as taking a later train, getting us to Oslo in about 50min.  We ended-up taking a taxi to the airport so we wouldn’t feel rushed to get there. The Bergen Airport was small & very easy to navigate. This was also the very 1st time that we’d been able to fly MASKLESS on a plane in TWO YEARS, & you’d better believe we did just that!!  A flight experience reminiscent of 2019!!

We then went back to spend another night @ the Scandic Byporten as it was still convenient for us.  There’s no need to ever feel obligated to spend a night @ the hotel that’s storing your luggage either.  You can just pick-up your bags & keep going!

So here’s our little trip to Norway, in a nutshell!!  Part 2 of another trip of a lifetime #complete!